A Better Solution to Graymail

Not too long ago, HubSpot published a post explaining how they unsubscribed 250,000 people from their HubSpot Marketing Blog. They went from 550,000 total subscribers down to 300,000, in order to avoid a very real problem known as graymail.Graymail is email you technically opted in to receive but don't really want. Maybe you downloaded an ebook somewhere and now you're getting the company's emails. You opted in, but you don't really care about the emails. You don't hate them enough to unsubscribe, but you also don't open 9 out of 10.

Why is Graymail a Problem?

Graymail is a problem for marketers because recipients' servers will send their emails straight to recipients spam folders — even for brand new subscribers who haven't even had the chance to engage yet.

Regularly purging people who don't engage is one way of dealing with graymail, but is it the first step you should take?

What if your just emailing people at a bad time?

There are several reasons why people may not be opening your emails. Maybe you're sending your emails 5 minutes after they head into their meetings for the day, and they don't have time to deal with non-urgent emails after a certain time of day.

Or maybe your competitors are sending their emails an hour before you are. People only need so many emails on a particular topic in one day, so they simply read whoever's email is at the top of their inboxes.

We noticed that this second situation was a likely culprit for part of HubSpot's graymail problem.

In the below Communication Profiles from the Seventh Sense platform, it's clear that Hubspot tends to send their blog notifications between 8:45AM and 9:45AM seven days a week, Marketo between 9:45 and 10:45 during the work week, Act-On between 10:00AM to 11:00AM and Insidesales.com between 7:30AM and 9:00AM. 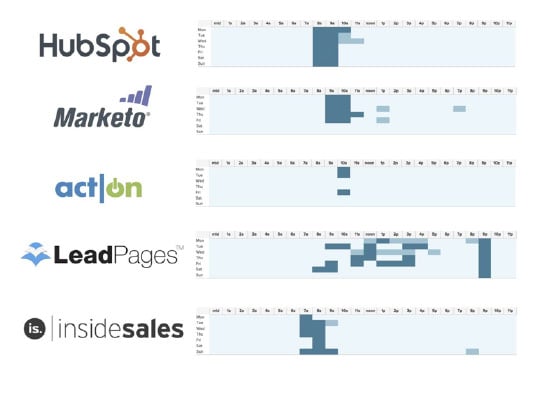 Note that these are all Eastern time zone, so these times would be even earlier for Central and West Coast individuals.

Another interesting stat here is that Marketo doesn't publish blogs over the weekend, or at least haven't since I've subscribed to their blog. This would actually be a perfect time to send me new content, and can imagine it would be an ideal time for other professionals that don't have the time during the week to engage, given the 100+ other responsibilities they have.

The outlier here is Leadpages who sends every night (7 days a week). I get a blog notification from their CEO, Clay Collins, between 9:00PM and 10:00PM.

What If You Tried Sending Your Marketing Emails at a Different Time?

Let's dive into the problem a bit more here. If I had time to engage in blog content in the morning, I'd have 4 emails / blogs vying for my attention in the above example. That would be bad enough. However, I typically like to catch up on interesting content late in the evening. Guess who happens to be at the top of my inbox at that point? Leadpages' Clay Collins, and I really dig his content.

Adding to this problem, a significant portion of the population now unsubscribes from content or just never engages in it because the emails are buried under 100+ other emails they got that day. The emails feel like a burden to deal with since there are so many piled on top, and people just want to get rid of them.So is graymail really just ill-mail, ill-timed email?

We've statistically proven that unsubscribe rates go down and engagement rates go up if you do not send ill-mail and use a personalized delivery time instead of sending indiscriminately.

While Seventh Sense was designed to automate the capture of when individuals like to engage in your content and then automate the delivery of each email for each contact through HubSpot, another idea would be to add another drop-down field on your subscribe forms, asking users what time of day they prefer to receive their content (whether that be morning, mid-day or evening), and set up different personas for each.

Finally, some food for thought. I was having a discussion with the CEO of a $3 billion company who has been a mentor of mine and his comment was “I wish Nordstorm had your technology. They always send me emails for 6-8 hour sales and it's always at the wrong time. By the time I get home and open and click on the email, the sale has expired and I'm out of luck. I would actually buy from them more often as they've done a good job of personalizing the content, but clearly they haven't done such a good job on the delivery time.”

Just think of how many customers you're leaving out in the cold by sending your campaigns when it's most convenient for you, or when you think is your peak engagement time.

Ill—mail and How it's Hurting You!